What does Lobdra mean?
Philosophy of association
Contributors
List of Newsletters
Actual Projects
Networking of the association via memberships
Web Links


During the past two and half thousand years, the Buddhist Science of Mind hasn’t lost anything in terms of significance and actuality. In the past centuries, the Pali-Canon of the Nikāya-tradition has been made almost fully accessible, through those such as the Pali Text Society. For the other main traditions of Buddhism, Mahāyāna and Vajrayāna - which the Association mainly focuses on - the situation is quite different. Unfortunately, during the last 70 years only a fraction of the complete corpus has been translated and handed down to the Western culture.

The reason for this are a number of barriers. These include:

For the benefit of the individual and the society, the Association Marpa Lobdra Germany e.V. will contribute to the improvement of this situation.

Reason for the joint undertaking

Marpa Lobdra Germany e.V. belongs to the international student-network Marpa Institut for Translators, www.ktgrinpoche.org the initiative of the Tibetan scholar and Yogi Khenpo Tsultrim Gyamtso Rinpoche. From his vast treasure of knowledge and experience, throughout the world he opened the doors to the insight of the Buddhist Science of Mind. He inspired his students to share their knowledge and experience efficiently for the benefit of the society.

The examination of the wide spectrum of Buddhist Science of Mind presents us with meaningfulness and orientation. It puts our individual daily life into a larger, meaningful context and makes it considerably easier. It inspires our creative strengths and thus we take great pleasure in giving insights a creative form. Our social and ecological engagement is on a voluntary basis with honorary posts.

The principles of the Association

The Association is purely for charitable purposes. The Association is neutral with regard to politics and confessions. It mediates and promotes dialogue based on the global ethical principles of non-violence to humans, animals and their environment. It supports tolerance and understanding in terms of spirituality, culture and society.

The culture of the organisation is based on benevolence, liberality and non-violent communication. The Association promotes the organisation and implementation of a curriculum of study, including buddhist logic and meditation. The curriculum is in accordance with the standard of high schools in buddhist monasteries.

The Association enables its members and interested persons to get to know the aspects of Buddhist Science of Mind that interest them to whatever extent they wish.

The buddhist path as a search for meaning leads to a deeper insight, to knowledge and satisfaction. It takes place in three stages:

This applies to all fields, including: to the field of knowledge of deep-ecology, depth psychology based on the explanations of the Abhidharma, to the training in philosophical views in stages and to the buddhist art of healing.

For the benefit of the society, the Association promots dialogue, exchange of knowledge and experience in the fields of science, philosophy, ethics, religion, psychology, healing, deep-ecology, ethical economics, Asian linguistics and art.

In line with the purposes of the Association, it promotes the organisation and implementation of translations, publications, studies, research, meditational retreats, and exchange of information. It carries out single and regular, multilingual lectures, workshops, study- and meditation courses, retreats and trips to historical buddhist sites.

The Association engages in setting up a conventional library. It supports financially the huge project of a digital library with the registered recordings of Khen Rinpoche plus the publishing of his vast Dharma discourses. The Association promotes social activities such as helpfulness between buddhist communities. It informs the public about the means of support for the holder of buddhist science of mind, like for the level of education and the lives of ordained women in Asia. It also informs the public about the need for new construction projects or restorations for the purpose of the Buddhist Science of Mind. 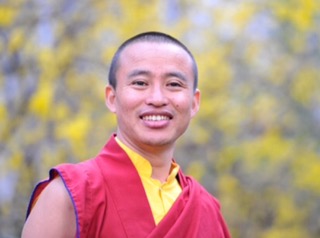 Ācārya Lama Drinme Dawa was born in the Himalayan Kingdom of Bhutan. He lived for many years as a monk under the spiritual guidance of Khenpo Tsultrim Gyamtso Rinpoche in his nunnery Karma Drubdey in the east of Bhutan, which Khenpo Rinpoche established after his escape from Tibet in 1968. In 2000, Lama Dawa successfully completed his education as an Ācārya at the Karma Shri Nalanda Institut for Higher Buddhist Studies at Rumtek (in the State of Sikkim, India). Khenpo Tsultrim Gyamtso Rinpoche was the inspiration for his traditional threeyear lama-training, which Lama Dawa received from Bokar Tulku Rinpoche. Although he would have liked at this point to follow the path of yogi Milarepa, he was appointed as secretary in the administration of the Dharmachakra Monastery Rumtek. In 2009, H.H. Ogyen Trinley Dorje sent him to Hamburg as the residence Lama in the Buddhist Centre Theksum Tashi Chöling (TTC). Lama Dawa has kindly offered to support the activity of Marpa Lobdra Germany opening up the possibility for Marpa Lobdra courses at the TTC Hamburg. 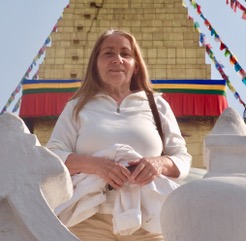 Jane, one of the first students of Khenpo Tsultrim Gyamtso Rinpoche, Jane has dedicated her time to the founding of the association Marpa Lobdra Germany. Through course offerings, research andmeditations, she teaches Khenpo Rinpoche‘s formidable curriculum. She views the acquisition of the Tibetan literary language as a great source of inspiration. Jane supports the creation of study materials, translation as well as Tibetan language study courses for beginner and advanced learners. More info ...

René laid the foundation for his career as an engineer through his study of chemical and environmental engineering at the HTW in Dresden from 1993 to 1998. His areas of focus were instrumental analysis and environmental analysis. His professional experience has included work with the pharmaceutical industry in the production of oncology medication, as well as 12 years on the production of batteries for industrial applications. He has worked since 2015 on the production and characterization of reference materials for national and international laboratories.

René came in contact with the tradition of Tibetan Buddhism in 2009. The first textual studies dealt with Shantideva‘s Bodhicharyavatara in form of Ringu Tulku‘s comprehensive video, as well as the Lorig („The Mind and its functions“ of Gesche Rabten) at the buddhist Centre Bodicharya in Berlin Friedrichshain where he came in contact with Jane Pathan Friedewald.

René supports the association Marpa Lobdra Germany e.V as a board member, as web master, in the organization and realization of events and courses, as well as in public relations work for the association.

At the moment we focus our activities in the Compilation of comprehensive study material:

Networking of the association via memberships

We attempt to be involved in the activities of the following associations via memberships: